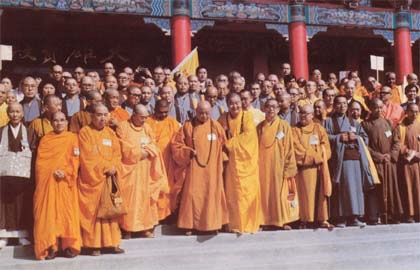 In 1980, Ven. Pai Sheng Mahathera saw the instability in the world and sufferings of humanity. He felt the importance of      Buddhism to relieve global sufferings and turmoil. He resumed the activities of WBSC to promote global Buddhism. It's urgent  to improve world peace and harmony through the spirit of Buddha. With the approval of Ven. Dr. M. Wipulasara Mahathera  from founding nation of WBSC and support from Ven. Kok Kwong Mahathera and Ven. Sik Sai Chun in Hong kong, Ven. Pai Sheng  Mahathera and Ven. Wu Yi Mahathera organized the third General Conference in Taipei in December, 1981. There were 750  attendees from 18 nations. The theme is "Buddhism and Peace". It is the new chapter in the modern Buddhism history.

During the third General Conference, amendments were made to the WBSC constitution and 20 proposals were passed to promote the unity of international Buddhist groups, interchange of cultures, and train and disciple the future generations. It laid out the foundation for the future development of Buddhism. Ven. Pai Sheng Mahathera was elected as President. Ven. Kok Kwong Mahathera from Hong Kong , Ven. Somdej Phra Puddhacarya Mahathera from Thailand and fourteen others were elected as Vice Presidents. Ven. K. Sri Dhammananda Mahathera from Malaysia and others also were elected as different committee members.

The third Executive Committee was officially formed and became the leadership of WBSC activities. The Secretariat of the headquarter of WBSC was approved to be located in Taipei, ROC and registered with Ministry of the Interior of ROC. The Chinese Secretary General was Ven. Wu Yi Mahathera from Taiwan and English Secretary General was Ven. Dr. M. Wipulasara Mahathera from Sri Lanka. Together they organized and promoted WBSC activities and ministries.