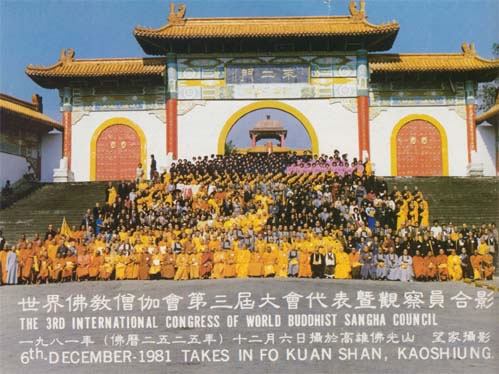 We, the members of the World Buddhist Sangha Council participating in our Third International Congress, held in Taipei, Taiwan, ROC, from the 1st to the 7th of  December,1981, do hereby solemnly make the following declaration:

As soon as the Buddha had sixty disciples who were liberated and emancipated(Arhants), he advised them to go forth and spread among people the message of compassion and wisdom “for the good of the many, for the happiness of the many.”

There are more than one million Buddhist Monks in the world today, both Theravada and Mahayana. They are all disciples of the Buddha.  They should all be united as one solid organization in spite of superficial minor differences.  And they should all try to develop their ethical, intellectual and spiritual standards, and adapts themselves to changing social and economic conditions in the modern world.

As members of the Buddhist Sangha, we get united and we improve and strengthen our position not merely for our own good, but, as the Buddha advised, also “for the good of the many, for the happiness of the many.”

Today humanity is threatened with the possibility of a nuclear war, that means unimaginable and unprecedented destruction and suffering throughout the world. Superpowers are threatening one another and brandishing the latest weapons of annihilation. If they put one step further in that direction, humanity would be destroyed within hours. Those who wield power in the world seem to be devoid of mental health Only the voice of the well-organized masses of people across the world many bring them to sanity. The members of the Buddhist Sangha can contribute largely to achieve this by spreading the Buddha’s message of compassion and wisdom and peace against violence and materialist thinking devoid of moral values, and by organizing mass meetings against war. The World Buddhist Sangha Council should make every effort to achieve this noble purpose.