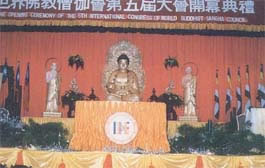 We, the members of the World Buddhist Sangha Council, assembled for our Fifth International Congress in Taipei and Kaohsiung of Taiwan, ROC, from October 28 through November 2 of 1989, do hereby sincerely and solemnly declare that:

As Members of the Sangha Community, we will uphold with all our strength and resources the spirit of Buddhism as enshrined in our Constitution for the good and well-beging of all Buddhists and the world;

As Buddhism, in its intrinsic value, stands for peace and tranquility, it is our bounden duty to strive and cooperate with all other peace-loving world organizations to eradicate evils and to build a secure, peaceful, and harmonious world;

In order to save human beings from the horrors of war, particularly nuclear warfare, we plead with all nations to cease trading in arms and we appeal to the super-powers to discard and destroy all their deadly weapons;

Painfully alarmed by the degeneration of ethics and morality amongst the people of the world, leading to crime, terrorism, violence, drug addiction, and other unseemly anti-social acts, resulting in the destruction of society and human rights, we will do our utmost, through the teaching of Buddhism, to guide the world to sanity and an orderly way of life respecting the rights of all sentient beings; and Noting with deep appreciation the great work contributed by our late President Ven. Pai Sheng who passed away on April 3 of 1989 and that one of the noble efforts conceived by him was the establishment of a Buddhist Hsuan Tsang University in Taiwan by the Buddhist Association of the ROC for the advancement of the Buddha Dharma and for the benefit of society, we whole-heartedly endorse the realization of this project and earnestly appeal to the Buddhist world to give BAROC thier unstinted support in the name of Buddhism.